While some have been inclined to interpret the visions of the book of Revelation from a continuous chronological standpoint, the structure and symbolism of the visions, I believe, offers overwhelming evidence that the framework is instead cyclical. That is to say, the same end-time themes and events are repeated, presented from different points of view, emphasizing specific aspects and details, as the visionary narrative builds to a climax. This will be discussed further when we come to the Bowl-cycle of visions in 15:5ff; however, it is important to stress the point now as we look at the visions of chapter 14, for, in many ways, they are a key to the entire structure of the book.

There are three visions in chapter 14:

These correspond roughly with the three main components of early Christian eschatology:

The vision in verses 1-5 both builds upon the prior visions of chapters 12-13 as well as repeating important themes and symbolic matrices from the earlier visions (in chapters 5 and 7) which precede the Seal- and Trumpet-cycles. The main imagery from those visions is centered on the exalted Jesus symbolized as a heavenly Lamb (a)rni/on). In each instance, the Lamb is surrounded by the People of God—in both their heavenly (chap. 5) and earthly (chap. 7) aspects. On the symbolism of the lamb, cf. the earlier notes on 5:1-14. Here in chapter 14, the imagery more closely reflects that of chap. 7 (cf. the note on 7:9ff).

“And (then) I saw, and see!—the Lamb having stood upon mount ‚iyyôn, and with him a hundred and forty-four thousands, holding his name, and the name of his Father, (it) having been written upon the (space) between their eyes.”

‚iyyôn (Gk Siw/n, English Zion, a transliteration of Heb /oYx!), is a traditional Israelite/Jewish name for Jerusalem. It likely meant something like (“fortress, fortified place”) originally, and refers specifically to the ancient Canaanite hilltop site taken over by David as the location of the Israelite Temple-Palace complex (and the oldest part of the later city). Near Eastern cities of the Bronze/Iron-ages, unlike most Greco-Roman (and modern) cities, covered a much smaller area, largely limited to the palace(s) of the ruling family and associated temple-complex(es). They were walled and highly fortified, on hilltop locations, often built-up as such through successive levels of occupation. The majority of population, as farmers and herders, lived outside of this fortress-city, but would take refuge behind its walls in times of invasion or natural disaster. Thus “Zion” came to be used as a symbol of refuge and salvation in the Old Testament and Jewish tradition; this imagery was enhanced due to the manifest presence of God (YHWH) in the sanctuary of the Jerusalem Temple (on the Zion-site). The term (Siw/n) is rare in the New Testament, occurring just seven times (almost always in Scripture quotations), and only here in the book of Revelation. In Hebrews 12:22 it is used as a reference for the heavenly dwelling of believers, those saved and redeemed through the atoning sacrifice of Jesus; that is the same basic meaning here in Rev 14:1. The mountain location may also be intended to symbolize a point where heaven and earth meet—i.e., the people of God (believers) in both their heavenly and earthly aspects.

The motif of the 144,000 believers was introduced in the chapter 7 vision (vv. 4ff), comprising 12,000 from each of the twelve Israelite tribes. Interpretation of this symbolism as proven a bit difficult. Certainly the specific number is symbolic (12 x 12 x 10,000), and ought not to be taken in a concrete sense any more than should the image of the hybrid “creatures” that come up out of the “Sea” and “Earth”. However, there is perhaps more reason to take seriously the ethnic (i.e. Israelite) aspect of the image in 7:4ff, and, indeed, many commentators would interpret it as specifically representing Israelite/Jewish believers, perhaps along the line of Paul’s idea, expressed in Rom 11, of a widespread Jewish conversion at the end-time. In my view, this is correct, but only partly so. As I discuss in the previous notes (on 7:1-8 and 9-17), there are actually two groups in vv. 4-17 which make up the sum total of believers (the people of God): (1) the restoration of Israel (i.e. Jewish believers, vv. 4-8), and (2) those from all the other nations (vv. 9ff). While the 144,000, in that vision, more properly refers to Israelite/Jewish believers, here, in my view, it serves as a shorthand for all believers—i.e. the entire people of God.

The scene depicted in verse 1 clearly echoes the imagery of the two visions in chapter 13, at two main points:

“And I heard a voice out of heaven, as a voice of many waters and as a voice of great thunder, and the voice that I heard (was) as harpers harp-playing on their harps.”

The description of this heavenly voice echoes that of 1:15, the introductory vision of the exalted Jesus (cf. the earlier note), which, in turn draws upon traditional Old Testament theophanic imagery. Here it is also described as the sound of music, specifically of heavenly musicians playing the harp (Gk kiqa/ra). The kiqa/ra is harp made up typically of seven strings (and almost certainly seven is intended here); for classic references to its use and symbolism, cf. Koester, pp. 378, 608-9, 618). Here its use reflects the heavenly worship of the Lamb in chapter 5 (v. 8). 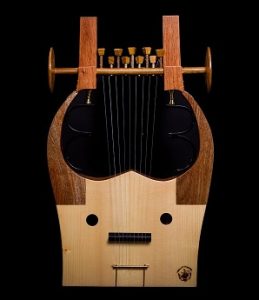 “And they sang (together) [as] a new song, in the sight of the ruling-seat [i.e. throne] and in the sight of the four living (being)s and the elders, and no one was able to learn the song if not [i.e. except for] th(ose) hundred and forty-four thousands, the (one)s having been (purchased as) at market [h)gorasme/noi] from (out of) the earth.”

This is essentially a repetition of the heavenly worship scene in 5:6-14, with the “new song” being that described in vv. 9-10ff. It is new (kaino/$) in the sense that it belongs to the New Age that was inaugurated with the death, resurrection, and exaltation of Jesus (the Lamb). Since it relates to a true understanding of the person and work of Jesus, only Christian believers (represented by the 144,000) are “able to learn” this song—here the verb manqa/nw (“learn”) probably signifies both the ability to sing the song and to understand its meaning. On the traditional idiom of the “new song”, cf. Psalm 33:3; 40:3; 96:1; 98:1; 144:9; 149:1; Isa 42:10.

The verb a)gora/zw literally refers to going to the market-place (a)gora/) or public square (to make a purchase). It can be used in the specific context of purchasing someone’s freedom (out of slavery/bondage); that is generally how Paul uses it (in 1 Cor 6:20; 7:23, 30), referring to believers being purchased out of bondage (to sin) through Christ’s sacrificial death, and so also here in the book of Revelation (cf. Rev 5:9). Here the “earth” (gh=) has the basic meaning of the inhabited world (i.e. all of humankind), but also in terms of the world dominated by the forces of evil and wickedness (i.e. the Dragon and Sea/Earth-creatures). There is likely a play on the idea of those belonging to the Sea-creature needing the mark of its name in order to purchase (13:16-18), with those belonging to the Lamb bearing the mark of his name because they were purchased by him.

“These are the (one)s that were not stained with women, for they are virgins—these (are) the (one)s following the Lamb wherever he would lead (himself) under.”

The 144,000 (i.e. believers) are now described using sexual imagery, introducing a strain of symbolism that will grow and climax in subsequent visions. The reference here is actually quite complex, drawing upon a number of traditional images. The most difficult point of interpretation is the phrase meta\ gunaikw=n ou)k e)molu/nqhsan (“they were not stained with women”). There are two ways this may be understood, depending on how the phrase is emphasized:

I tend toward the second option; either way, the sexual imagery is largely figurative—symbolizing purity and faithfulness (to God and Christ). The Greek word pornei/a (literally, prostitution, but generally referring to improper sexual activity) in the New Testament often refers figuratively to a lack of faith and false religious belief and practice, etc, following a long line of Israelite/Jewish tradition going back to the Old Testament. And, given the context of the prior visions in chapter 13, the idea of sexual immorality here should be understood in terms of the wicked/false worship of the Sea-Creature (and Dragon). The second vision in 14:6-13 (discussed in the next note) will make this quite clear.

Several strands are built into the image of believers following the Lamb:

I have translated the verb u(pa/gw above literally as “lead under”, often used in the basic reflexive sense of “lead oneself under”, i.e. make oneself hidden, or, more generally, go away. I preserve the etymological meaning here for two purposes: (1) the prefix u(po/ (“under”) is often used in verbal compounds denoting obedience, endurance, etc, and (2) it captures the sense of the Lamb going away, i.e. so that he cannot be so easily seen, which requires faithfulness and devotion in order for his followers to search after him (esp. in times of great distress).

“These are the (one)s purchased (as) at market from (out of all) men, the beginning of (fruit) from (the harvest) for God and the Lamb, and in their mouth was not found (anything) false, (for) they are without blame.”

The lack of anything “false” in the mouth of believers is probably meant as a contrast to the deceptive/false speaking of the Sea- and Earth-creatures, by which non-believers on earth are led astray (13:5ff, 11-14ff). The idea of being “without blame” or “without blemish” also ties back to the earlier sexual imagery and bridal motifs—i.e., the bride as a chaste, virginal young woman who is presented to the groom at the time of the wedding. This entails remaining pure during the period of betrothal (engagement). Such bridal imagery is applied to (faithful) believers at a number of points in the New Testament (Matt 25:1ff; Jn 3:29; 2 Cor 11:2, etc); it will take on even greater prominence later in the book of Revelation. Interestingly, it is not entirely unusual to combine bridal and harvest motifs, as we see this done throughout the Song of Songs and elsewhere in the Old Testament. A particularly noteworthy passage is Jeremiah 2:2-3, which resembles Rev 14:4-5 in a number of respects.

This study site continues the notes and articles previously posted on the Biblesoft Study Blog. It is now the product of HOMOTHYMADON Ministries, and also operates in partnership with biblehub.com.