“…and I made known to them your name, and will make (it) known, (so) that the love by which you loved me would be in them, and I in them.”

In the previous note (on v. 25), we discussed the important Johannine theme of Jesus as the Son who makes the Father known to believers. This idea of knowledge (vb ginw/skw) is central to the Gospel—we come to know the Father through the Son. With the Son’s departure (return) back to the Father, this process of revelation—of making known (vb gnwri/zw) the Father—occurs through the presence of the Holy Spirit, operating in Jesus’ place. It is the related verb gnwri/zw (“make known”) that is used here, and the Father is made known by way of His name (o&noma). Both of these are key points of emphasis in the Gospel, and especially here in the Prayer-Discourse.

“I made your name shine forth to the men that you gave to me out of the world.”

The emphasis on the name of the Father continues in vv. 11-12:

Two points are clear: (1) the Father has given His name to Jesus (the Son), and (2) believers are protected and kept united in this name. As previously noted, in the ancient world, a person’s name was thought to embody and represent the essential nature and character of the person, often in a quasi-magical manner (cf. my earlier notes and articles on this point in the series “You shall call his name…”). Thus, in giving and making known the Father’s name, the Son is revealing the Father Himself (14:6-11, etc). Ultimately this is realized for believers through the presence of the Spirit, by which we are united with Father and Son, and in the bond of love that the two share.

Indeed, here in 17:26, the name of the Father and the divine love are closely connected, and both are fulfilled through the presence of the Spirit. It is through the Spirit that Jesus can continue to make known the Father (His name)—note the use of the future tense, “and will make (it) known [gnwri/sw]”. Moreover, it is only through the uniting bond of the Spirit that both God’s love, and the presence of His Son (Jesus), can be in us. God is Spirit, and union with Him can only occur in the Spirit (4:24). The abiding presence of this love—the Father’s love, given to us, as His children, through (and as part of) His love for His own Son—has been emphasized at a number of points throughout the Last Discourse, and again here in verse 23 (cf. the prior note). The same structural idiom is used: the Father gives to the Son, who, in turn, gives the same to those who trust in him.

This indeed makes for a powerful and fitting end to the Last Discourse, and to the Johannine Discourses as a whole. All of the key themes and theological points are distilled, in these few verses, into a poetic description of our union with God. It follows the chain of relationship—Father-Son-Believers—but is ultimately resolved into a triadic unity, which I like to represent (however inadequately) through the following simple diagram: 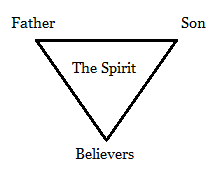 This study site continues the notes and articles previously posted on the Biblesoft Study Blog. It remains associated with Biblesoft as a resource for scholars, ministers, and students of Scripture.